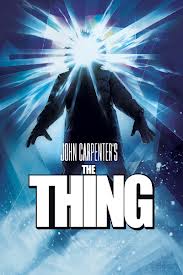 It is my list so bugger off if you have your own ideas of what should be on it. I say that with the utmost respect. 🙂

This list has to do with my 5 most favorite movies of all time — ready for it? — that I can watch again and again. And again.

We all have our issues, mine is needing to watch the following movies at least once a year. 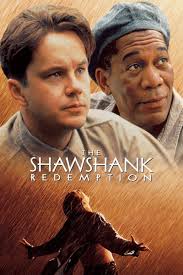 You better believe it… And yes, written by Frank Darabont who can do no wrong in my book. The good about this movie: Incredible characters trapped in impossible circumstances. That feel of “I could be there, I could have done that!” It’s the kind of movie that makes it’s way into the back of who you are… “Get busy living, or get busy dying.” Come on, wish I wrote that stuff. And lived it. Unbelievable dialogue. And who doesn’t love Morgan Freeman? Moving on… 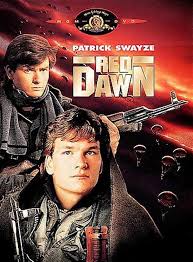 Who’s not a Wolverine at heart? Okay, compared to the reality shows where contestants are making fires naked, choosing to live off the grid with a strip of cloth around your head and an AK-47 might not exude roughing it. But, it’s about the cast and the circumstance… Patrick Swayze, C. Thomas Howell, Charlie Sheen, Lea Thompson, Jennifer Grey (with nose)… that was an awesome assemblage of young freedom fighters. And who could hold back a tear when the sons are talking to their dads at the fence? And Dean Stanton scream, “Avenge me, boys!” Ahhhh… this dish is served once a year.

That alien limb-tentacle thing on Wikus looked so real! This is Metamorphosis meets Alien. And the movie changed how scifi blockbusters were done in Hollywood, it really did. Unknown actor, a location most Hollywood offices would never consider for shooting (uh, are there even tax breaks in South Africa?), a nothing budget for this kind of movie because the effects were crazy amazing! The story… so simple. A man gets infected with the very thing he’s in charge of confining. Wow. Con-flict. Annnnnnd… once a year viewing for me. 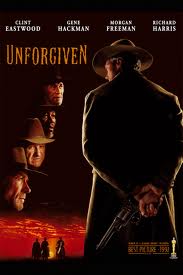 Man, I’m so not a western guy (don’t tell my DVR because I’m sure it’ll rat me out about my Deadwood obsession). But this is my 2nd pick, almost numero uno in my illustrious list. Love the flawed main character in a small-picture-feel. But it’s not at all small when we get to the end and Bill Munny enacts revenge on the bastards to cut up the whore or Little Bill who protected them. When you see Bill struggling his hardest to be a good person but life tells him that he is another kind by beating him down and placing a drink in his hand you can’t help but want that bad man to come back and do what he does best– gun down the rest. Chills. Count me down for two watchings of this movie a year.

Are you really doubting that this could be up at the lofting number one spot? John F-ing Carpenter at his best. And by the way I had the opportunity to have several meetings with him in Hollywood for development on The Thing mini series. He spoke about what scary is and I’ll never forget that. He is still a master in my mind even if he was a part of Ghost of Mars. Those conversations might just have made it into my own work (I can only hope). Isolation. Paranoia. Bad ass creature. Winter wonder land. Okay, the last one doesn’t exactly sound like it would work with the others but it really does. I know it’s based on some B monster flick from the 50’s or whenever but this 1982 movie turned it out in a big way. And thank God Mr. Carpenter decided not to use that walking plant that was in the black and white version. As is, it is seriously scary to the tune of 2-3 watchings a year.